From 2003 up until 2007, I was lucky enough to have “movie reviewer” as my job description. As such, I’ve built up a *lot* of reviews for just about every movie that came out during those years, as well as reviews of classic movies.

The Barenaked Archives are reviews that I did for two previous websites. Sadly, they are both gone, so this is now the only place online you can see these old columns. 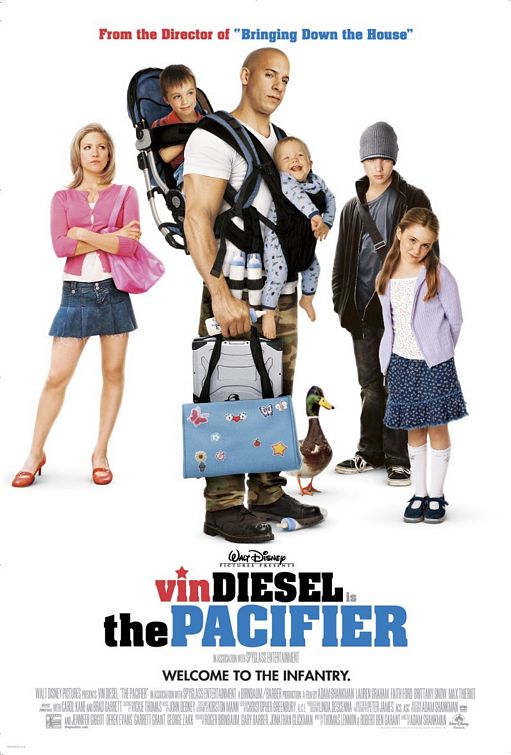 Mr. Nanny. Kindergarten Cop. Both are movies from our childhood wherein a buff, action-oriented star (Hulk Hogan in the former, Arnold Schwarzenegger in the latter) meets his match in rowdy children under the age of ten. This is funny, because, you know, they outsmart bad guys but get their butts handed to them by a bunch of kids.

Obviously not classic filmmaking in the least, but entertaining to the prepubescent set. Now, another film has come to join the ranks: The Pacifier, featuring current action star Vin Diesel. And like its predecessors, The Pacifier is probably a lot more entertaining if you’re a kid.

Vin Diesel plays Lieutenant Shane Wolf, a Navy S.E.A.L. who’s just come back into action after being shot during a rescue mission. His new mission is to protect the five children of a dead scientist while their mother goes away to check out a safe that may hold the scientist’s top secret project. When it turns out she’ll have to be gone longer than they thought, Shane has to find a way to live with the five bratty kids, and search for the project, which may still be in the house.

This movie winds up being sort of like director Adam Shankman’s last film, Bringing Down the House: there are some really good laughs, but for the most part the movie is relatively predictable and tepid.

Quite a bit of the film even tries one’s suspension of disbelief, especially the chase scene at the end with a 16-year-old handling a minivan at speeds one would only trust to a seasoned NASCAR driver. Also, a montage features a number of scenes that, according to earlier dialogue, take place within a week (or less), but it’s really hard to believe that the kids learned the things they did in that amount of time.

There are also a few times when the dialogue crosses into the painful territory, usually when they’re going for emotion rather than comedy. When Peter calls Shane “Daddy,” it elicits an “aw” from the audience. Shane’s emotional speech at the end, though, is close to nausea-inducing.

Sadly, Brad Garrett (Everybody Loves Raymond) is actually overused as the vice principal Mr. Murney. Even though there are points where his character is funny, it becomes so overdone that soon he’s an unbelievable caricature that won’t shut up. It’s hard to believe that this guy would be allowed to work in a high school for that long. Also, the romantic subplot between Shane and the kids’ principal Claire (Lauren Graham from Gilmore Girls) is completely sans chemistry and seems thrown in just because they felt Vin Diesel should have a love interest. It doesn’t work at all.

However, not all is bad. Unlike most movies like this where the kids are holy terrors, the kids here aren’t too bad. Their reactions to Shane feel a little bit more realistic than is typical for these films, and they don’t pull too many Home Alone-esque stunts. Also, Vin himself doesn’t do too badly (then again, this role doesn’t really feel like a stretch), and it certainly doesn’t hurt that he spends one scene in a towel.

The Pacifier is simply an average movie, one that would be a lot more entertaining for kids than for adults. If you’re being forced to take a younger sibling to the theater this weekend, this won’t necessarily make you want to kill yourself, but other than that, you can wait for 50-cent Tuesdays.

From 2003 up until 2007, I was lucky enough to have “movie reviewer” as my job description. As such, I’ve built up a *lot* of reviews for just about every movie that came out during those years, as well as reviews of classic movies.

The Barenaked Archives are reviews that I did for two previous websites. Sadly, they are both gone, so this is now the only place online you can see these old columns.

In A Man Apart, DEA agent Sean Vetter (Vin Diesel) and his best friend and partner Demetrius Hicks (Larenz Tate) take down one of the biggest players in the drug cartel, Memo Lucero, after working on the case for seven years. However, no sooner is Memo behind bars than a new and more dangerous leader emerges, known only as Diablo.

When Diablo orders an attempt on Sean’s life, the hit is botched, landing Sean in the hospital and killing his wife. Now, Sean and Demetrius must try to bring down Diablo, but Sean has his own agenda: revenge.

First off, it becomes apparent in this movie that Vin Diesel can do more than just beat the holy crap out of anyone who gets in his way and make wisecracking remarks. Well, granted, he does that in this movie, but he also proves that he can and should be taken seriously as an actor.

But to be honest, the person who surprised me the most was Larenz Tate. Where on earth has he been? He was single-handedly my favorite person in the whole movie. He and Diesel worked great together, and that’s part of what made this movie succeed.

The main thing one has to realize about this movie is that it is more of a drama than an action film. It moves a lot slower than most action films do, focusing more on the relationships between the characters and on how Sean’s wife’s death affects his life and the search for Diablo.

Of course, this is not saying that there isn’t any action in this film. There are two or three great shoot-outs, but camera work during those sequences is a bit jerky, making it kind of hard to follow what’s going on. And for the record, there is a twist at the end that even I didn’t expect.

If you’re tired of the usual films that promise loads of action but no plot or if you’d love to see Vin Diesel in something different, then A Man Apart is the film you should see. As for myself, I’d go watch it again in a theater. 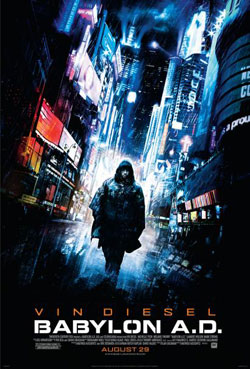 Spoilers ahead. Fairly be ye warned.

I love bad movies. Let’s get that out of the way right now. Mystery Science Theater 3000 is one of my favorite TV shows. Movies like Ultraviolet, which is so over-the-top bad but still takes itself seriously, or like Shoot ‘Em Up, which knows that it is a terrible movie about shooting guns at people and so focuses entirely on being a movie about shooting guns at people. It’s awesome.

I love bad movies because I love to laugh at them. But a movie has to really hit it perfectly to be truly horrible. In a way, being so-bad-it’s-good is almost as hard as being genuinely good.

Babylon A.D., sadly doesn’t quite hit the mark, partly because the first part of the movie is actually decent. Not necessarily great, mind you, but decent. Mostly for the setting rather than any true goodness by way of characters or story, but I bought it.

Unfortunately, when it devolved into a load of senseless drivel, nobody alerted the crew. So even though the audience is sitting out there going, “Oh, God, this is shit,” the movie doesn’t realize it. Thus, we end up with a movie that is just plain bad.

In Babylon A.D., Toorop (why on earth do people in futuristic sci-fi movies never have normal names?) is a mercenary living in eastern Europe. Or maybe Russia. He’s hired to deliver a package to New York City in six days. The “package” turns out to be a woman named Aurora (where have I heard this one before?) and blah blah blah I’m sure you can figure out where it’s going from there. She’s more than she seems, they run into lots of danger on the way, and a big shadowy baddie is looking for her.

Yeah. I’ve never heard this one before.

First off, the cast. Michelle Yeoh is completely underutilized. You have a great actress who’s known for martial arts, and what do you do? Shoot action sequences like your cameraman and film editor both had the world’s worst case of ADHD and were addicted to crystal meth. You can’t see a damn thing that’s going on in any of them.

It also doesn’t help that the main villain is completely non-threatening. She’s a cold, ruthless bitch, but cold, ruthless bitches are not inherently threatening. At least, not when they can only spare two trucks of men to go after Toorop and Aurora. “Oops, that was it; guess I’ll just have to let them go.” Come on! You’re the villain! Let’s have a little dedication to the cause!

As you’ve probably guessed, the plot isn’t exactly gold star material either. The first part of story, when it’s just Toorop trying to do the job he was hired to do, is pretty good. It’s when we get to the last half to third of the movie that things just go flying off the track, and it quits making a damn lick of sense. 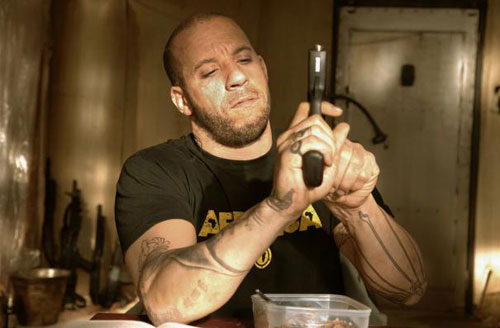 Just me and my gun…

Why does our lead trio go from “reluctant alliance” to “happy drinking buddies” in less time than it takes you to say “massive tonal shift”?
Why did they nuke the convent?
Why did the main villain SHOOT the ONLY person who could’ve told her where Aurora was, and then proceed to send only two trucks of men after her? (Yes, this one bothered me.)
Who the hell thought “AI in babies” and “pregnancy by pill” were good plot points?

I’m not thinking about it anymore. It makes my brain hurt.

When you stop making sense, that’s when you need to go completely over the top and just acknowledge that people will probably laugh at you, but at least they’ll be entertained. Hell, just have the main character suddenly start riding velociraptors through Times Square while shooting a gun that resembles the BFG from Doom.

As my brother would say, “It’s shit, but it’s entertaining shit.”

The worst sin a movie can commit is to be boring. Babylon A.D. hits this mark right at the end, because we don’t know what’s going on, why, or why we should care. Be good, be bad, be silly, be funny, be bold, be loud, be dumb. Just don’t. be. boring.

Now if you’ll excuse me, I’m going to go watch some Ghost in the Shell to remind myself of what good science fiction is.